This camera allows to combine the physical drawing world with the digital one. Simply draw something with a black marker on a light background, e.g. a Post-It note. Shift either the camera or the object around. Now you can use the sketch/doodle/line as a stamp, creating mroe images with your camera. Everytime you tap the "stamp" button, the black elements get saved on your canvas.

Try opening it on your mobile phone as well and use the rear camera to generate more stamped images! Maybe use your surroundings as well and not only sketches. What could light and shadow of your room or the buildings of your neighborhood add to an image? After having played around a little, I went outside to test the camera there. It was a lot of fun and I could not stop. The process itself then reminded me of the sketches by Christoph Niemann. 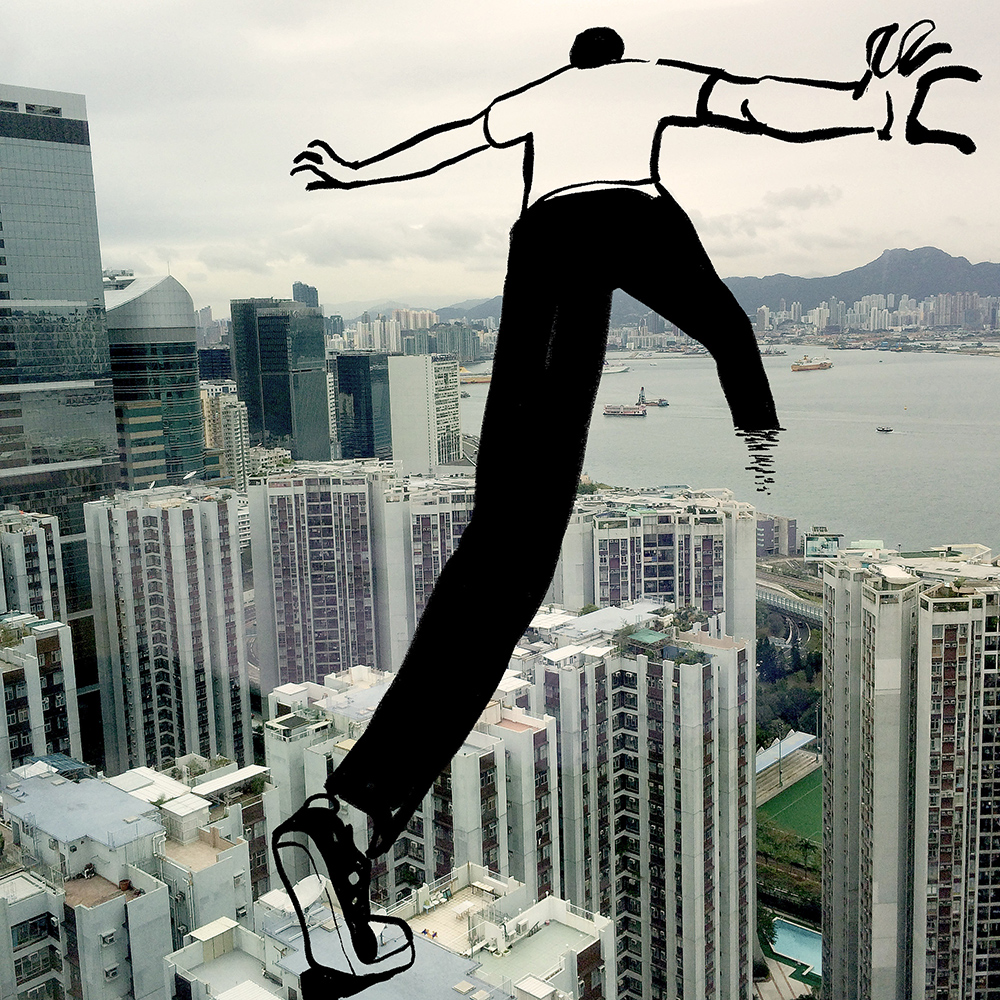 "Photo-drawing for the Blueprint co-working space in Hong Kong, 2014" by Christoph Niemann, downloaded on School of Visual Arts I wanted to create something that makes use of both worlds of the camera. Always doodling on Post-It notes, I thought this would be a great opportunity to create a new drawing tool.

As the laptop camera is not ideally facing to capture sheets of paper, I wanted to create the sketch so that a phone could also be used to generate images, as the flexiblity of the phone helps to capture every angle of a Post-It.

The canvas itself got a square shape (on desktop) as it thematically also represents a Post-It note. On mobile I wanted to make use of the whole screen, thus the shape varies over there depending on the phone. The "talking to yourself" camera. Using a CLM tracker, one would be able to have a conversation with a virtual person. The person however would just be the user's face tracked with a delay. Similar to project 2, this would have been a camera that connects the points of the same color together, creating a shape based on the surroundings.

In the end I chose the Post-It idea, as it had the most distinct purpose and allows for new drawing methods.

I generally understand the concept of the arrays, yet I struggled a lot to wrap my head around the the different numbers. Especially, since the camera has a different aspect ratio than my canvas, I needed to find a way to collect the right pixels indices so that the final image would not be distorted.

The camera itself selects the dark areas through the threshold set in the code (80), yet it is hard to understand from a human eye perspective what is within this threshold. What might seem "dark" or "black" in our eyes might be still a light gray for the camera and vice versa. This adds a uncontrollable randomness to the drawings that are getting created.

Also I faced a couple of issues when adding the mobile capabilities. After a while I only realized that the capture cannot be hidden on mobile, as it seems to be mandatory for the sketch to work. I decided to hide it via the css opacity property instead.